Not one to be outdone by Batman, his little sidekick sprung into action.

Earlier during the day we visited the National Arboretum.  We packed away and cleaned bottles while the kids played.  Hubby took them upstairs for bath time. I joined them a few minutes later. Just another typical day…

The bath assembly line was going when my littlest hopped up on the walker and took off.  Hubby saw her do it the first time.  I tried to get it on tape but she wouldn’t cooperate.

So now I have TWO twinsies on the loose. Who wants to come visit us? Don’t all say yes at once.

Well, ready or not it’s happening and YES I am screaming it from the hilltop!

I  was so excited yesterday I could barely contain myself. Here I was feeding the littlest miss after our trip to the park when big brother threw me for a loop!! He was not in the location I left him, which is normal, but this time was VERY different.

He was using the walker ALL BY HIMSELF 👏👏 My baby boy can walk, assisted, but he’s WALKING. I desperately wanted to call everyone distribute the video but I waited until hubby got home.

I’m so excited as I’m writing this. My Batman can walk. Definitely, no hiding from him now.  If he could get rid of his mommy separation issues, we would be golden.

Tomorrow I will have NINE MONTH old twinsies.

This month we saw some MAJOR developments.

Both babies are crawling on all fours. They are pulling up on things and moving from furniture to furniture.

Little mama got her first tooth.

Her ears were pierced while we were in NJ. 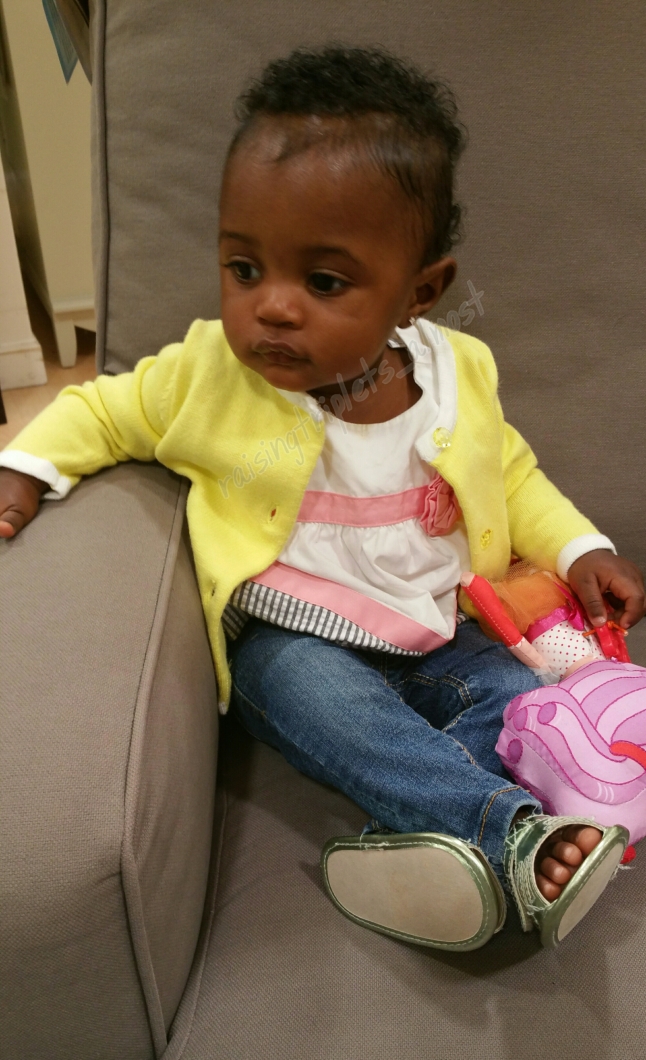 The babies were christened in New Jersey.

We celebrated our first Mother’s Day. What a difference a year made?

We are at that juncture of CHILDPROOFING .  The discussion for a cage to contain the craziness was made but we opted for the pack and play. I like to shop but I save whenever I can. More money to go exploring, besides, I can see them breaking out with big sister at the helm.

I know I’ve been looking forward to this moment where they are mobile, but now I wish I could go back just a few weeks ago when they were DISCOVERING how to crawl. It was cute then, not so much now. There’s no hiding from them anymore. As soon as they hear my voice, operation go find mommy is in full effect.

I think within the next month they will be walking for sure. My money is still on my son walking first. What do you think?

Today the twins turned 8 months. Only 4 more months until the big day!!!

I cannot begin to tell you just how excited I am (I literally just did my happy dance).  I must admit though, I am a nervous wreck because I have no idea what theme I will use for their party. There’s so much with keeping up with three littles under three I honestly haven’t thought much about it besides with two there’s so much more to think about.  If you come across any cute ideas please share ☺

SO.. what have they been up to?

BUDDY
Sits up
Says mama, dada, baba and an occasional nana (mainly says mama to my delight 🙂
Attached to his mama 👀
Has a mean side eye
Has 2 teeth
Size 3 diapers 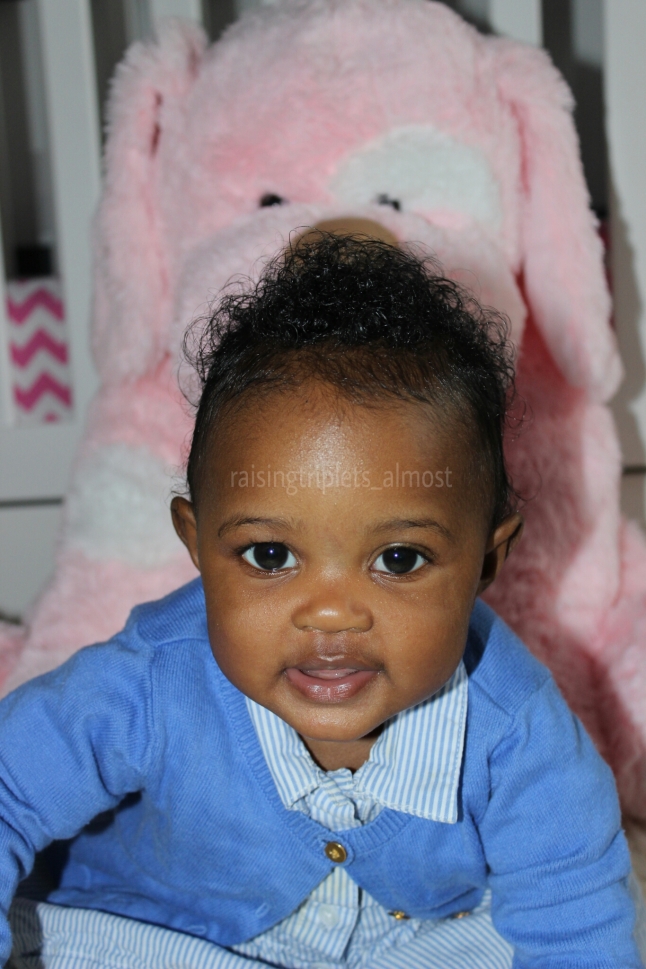 They are such great babies. I am one lucky mama. I would love to hear their conversations but for now facial expressions is all we have. Check thus out. The last pic gets me everytime!

Will we have walkers or crawlers this month? Stay tuned to find out 😉

So his twin sister has been kicking his tush on all fronts. She rolled over, she sat up, she spoke before him. You get the picture.

I’d be lying if I said I wasn’t concerned a little bit. I know kids grow at their own pace and they say boys grow at a slower rate but I still compare. I’m human…might be super at times according to my two year old, but human nonetheless.

One can only take so much and I guess he had enough of us talking about him. When his first tooth emerged last month I was one proud mama. My fave little guy was finally in the lead! Yaaay!! Take THAT, little sis.

So as of today, Sunday, March 29th, he has TWO teeth.  His second tooth broke the gum. I wonder how long before Mr. Chompers takes over.  His little sister gives him a hard time.  Perhaps if he bites her just once, the world would be in balance 🙂

Is that so bad?

Couple of weeks back, Batman (as his big sister affectionately calls him) started talking.  Can you take a guess what his first word was?  If you said BABA you are absolutely correct!!! Considering his relationship with food, it was very befitting; besides, Batman needs his energy to fight those villains (mainly his twin sister). hehe

Hubby and I lost the race; we were both hoping his next word would be DADA and MAMA, respectively.  Ricky Bobby in Talladega Nights says “If you’re not first, you’re last.” With first place taken, second is best. lol  So, Can you guess who won?

I was at the mall with all three kids in Old Navy Store the very first time he said MAMA.

He’s been saying MAMA, MAMA, MAMA since and I know I will regret it soon, much like Louis on Family Guy, but for now I’m enjoying every single time my Batman says MAMA 🙂

It was the warmest day of the year, thus far; too nice to be indoors; so what better way to finish the day other than heading to the park?

Finally, I could try out the new stroller Grandma picked up.  Just my luck, the wheels were a little flat, but I needed it to shuttle the kids to the park so I buckled them in and we carefully cruised on over.

She hopped off as we approach a father-son duo fishing at the lake.  She told him she was walking to the park with her mommy 🙂

After a while, they wanted in on the fun so I decided let’s try the swings and they loved it!! 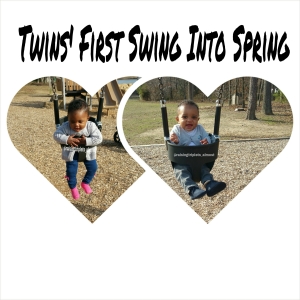 Seems like only yesterday my oldest was testing out this very swing.

Not one to be outdone, my little dare-devil climbed the biggest slide, giving me a slight heart attack with every step she took.  She lit up when she made her way to the top.

Another surprise was seeing her being comfortable with a dog. 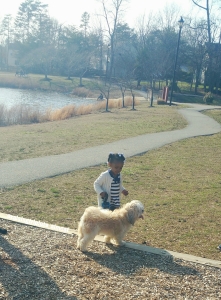 My baby girl is growing up 😥

I live for these days!

Yaaay! It’s my babies’ shots day, said no mom ever.

Hubby had to work so it was just me and my three littles venturing to the doctor’s office.  I’ve done this numerous times before, no problem.  As we pulled up at the doctor’s office (running late as usual) a little voice said “you don’t need the stroller, the carriers will do” What was I thinking? It probably would’ve been fine if I didn’t have a toddler with me, but I did. Many people applauded my efforts, a few called me SUPERMOM, but all the while my arms scolded me.   I will never make that decision again, even if its just a quick in and out of the doctors office (which this should have been). At six months, my twins are 17 pounds and 15.10 pounds; add that to the weight of the carriers plus the diaper bag…again…SuperMom or Just Plain Crazy?

Back to the matter at hand…shots. 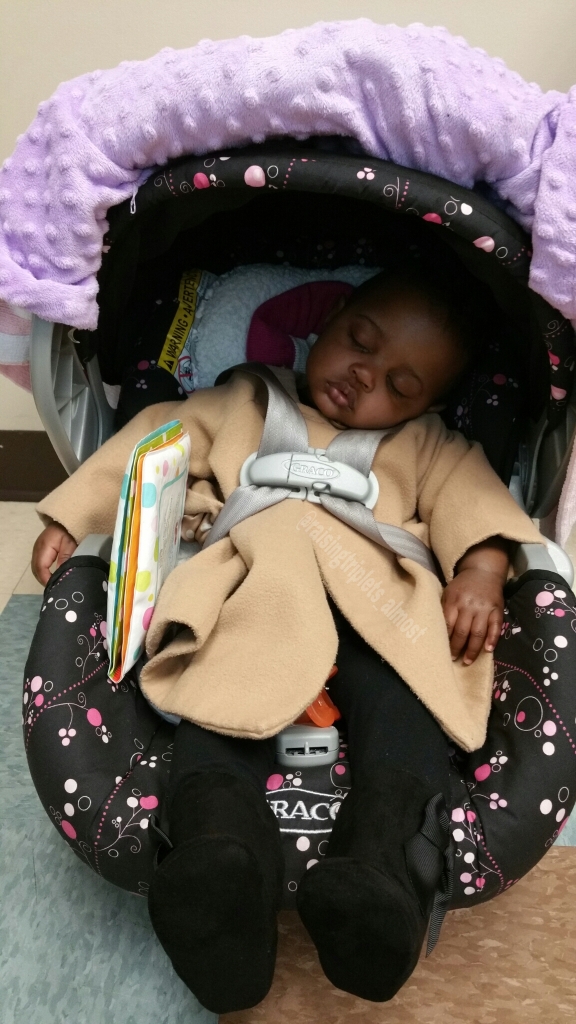 Nelle obviously had no idea of what was going on.

Alex, on the other hand… 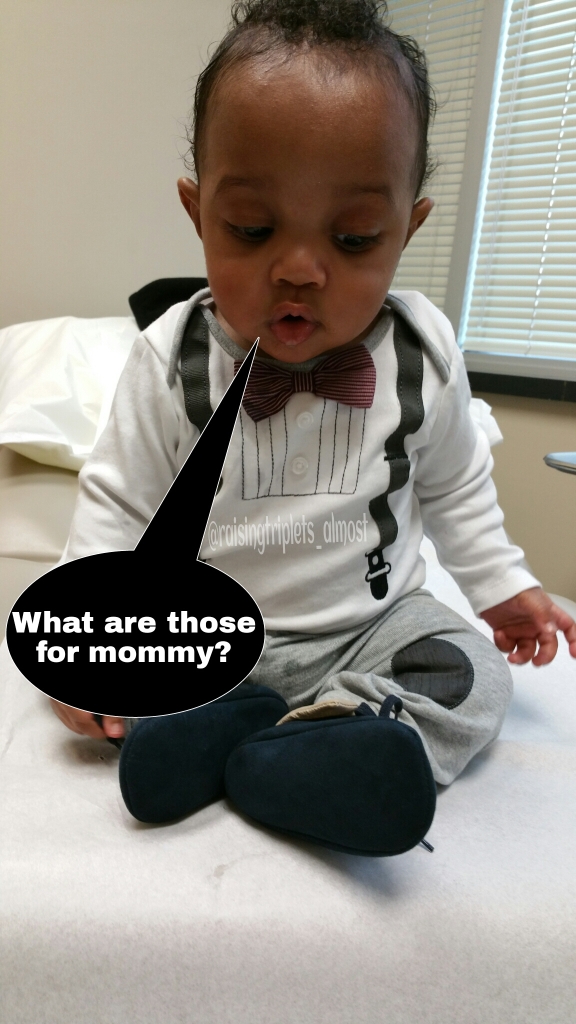 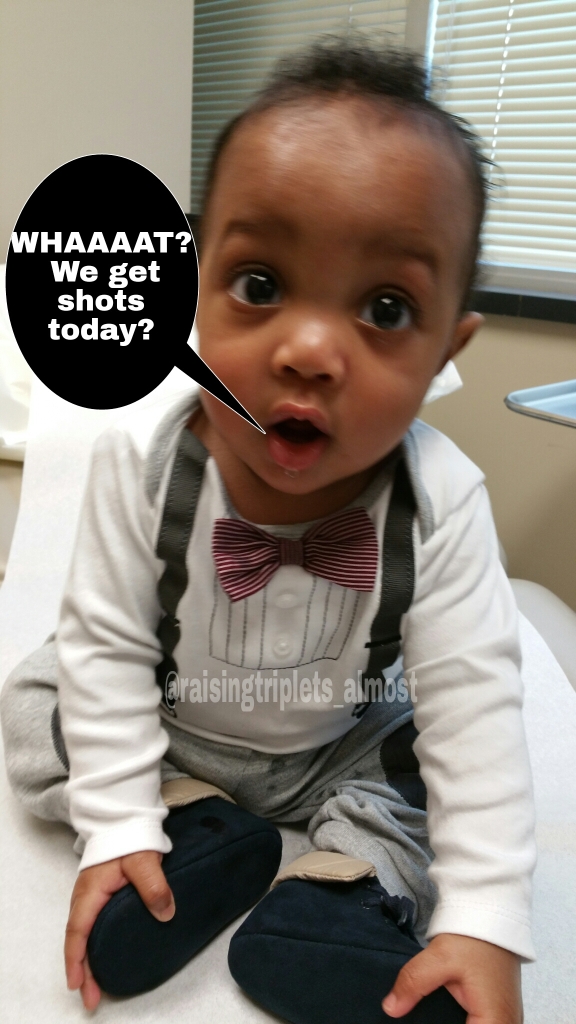 He went first and he let them have it! He probably got that from me, I’m a chicken. Hubby goes with me when I have blood work done or my daughter holds my hand. He turned red; there was no consoling him other than a bottle.  He wouldn’t let me put him down until he drifted off to sleep.

Nelle was next; she followed the nurse’s every move with such intensity. Upon receiving her shot, she cried for a minute and was over it just like her big sister used to do. 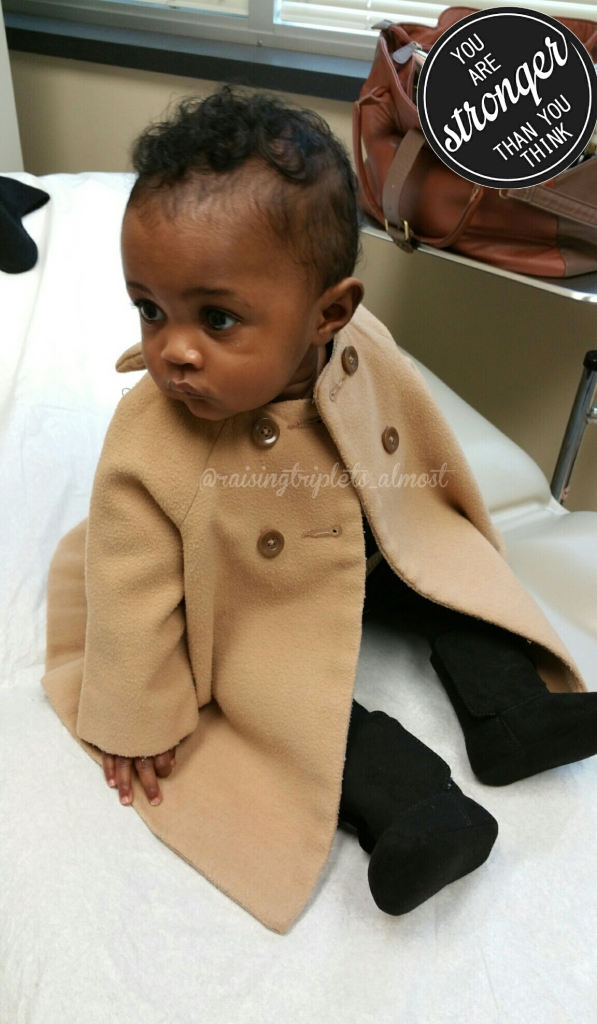 Who is shot day hardest on? Mom? The first twin? The second twin? Big Sister? Their appointment was not until 2 p.m.  I was anxious, but all the while trying to suppress my feelings so the twins wouldn’t pick up on it. Whoever goes first is left to console his or her self because the other child needs assistance so the nurses can administer the shots.

Perhaps its hardest on the second twin because they have to listen to the screams of the first, knowing they’re next. It might even be the big sister. She is very possessive of her siblings. You have to get permission from her to even talk to them.  It was hard on her today; she told the nurses “get out of my brother’s face”. She even cried at one point, so we had her leave the room.

It probably changes with each day, but what I know is, this is an experience that none of us look forward to and I take refuge knowing they won’t endure such pain for a while.

I know every mama says it, but where did the time go?

Somehow, I still feel like I just took our twins home a few weeks ago. One thing I do not miss is them spitting up every few minutes.  I love watching them discover things for the very first time.  They are avid television watchers who may have a slight obsession with Mickey Mouse and Sesame Street.

Ms. Kenzie is the best big sister we could hope for. She’s constantly telling me to go check on the twins, or do what she thinks needs to be done. She would be in their cribs first thing every morning if it was up to her.  I love how she interacts with the twins.  She doesn’t mind leaving them to go to the park, but otherwise, she absolutely adores the babies.  It will be very interesting to see how their interactions evolve. 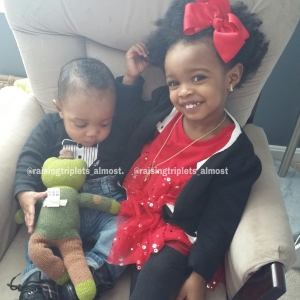 Nelle is quite the talker. As soon as she’s awake she’s babbling away.  She has three words in her repertoire: mama, dada and baba.  Nelle thinks her big sister is a comedian. She cracks up at any and everything big sister does.  She’s very strong willed and spends most of her days taking her brother’s toys and binkie (pacifier). 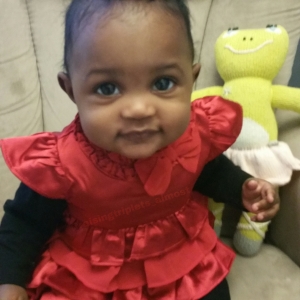 Her brother, on the other hand, is very melo.  He’s now captured the title of my “Irie Baby”.  He is definitely a mama’s boy, but I don’t mind 🙂  He’s working on a little chomper (1st tooth). His babbling sounds like he’s saying “HEY”.

Looking toward new adventures next month.